Last week turned out well for the stock market considering how the week began. Investors digested some bad news for most of Monday, realized some of it wasn’t so bad on Tuesday, and then bought back what they sold for much of the rest of the week. This was a good example of how odd markets can sometimes behave, even amid an otherwise healthy economy.

What might also have helped sooth investor worries was updated data from the government on the financial health of the U.S. consumer. We make up 69% of GDP, a historic high point as of the second quarter, so the overall financial stability of households is incredibly important for the economy. The data is encouraging so I want to share some of it with you.

While the data comes from the Fed the charts and commentary below come from my research partners at Bespoke Investment Group. What’s interesting this time around versus the Great Recession, for example, is how well the average consumer is fairing right now. They have cash in the bank, low consumer debt, and haven’t gone crazy using their homes as ATMs. All opposite from where we were during the mid-2000’s.

One takeaway for investors is that a healthy consumer equals a healthy economy, at least for the 69% of businesses catering to them. And given that our government is potentially adding trillions in more spending to the system, it’s hard to imagine the economy and the markets turning really nasty anytime soon given this backdrop.

That doesn’t mean markets won’t be volatile along the way. They’re likely to be and are again today. This is especially true during this time when the unthinkable seems to happen with regularity. There are simply too many balls in the air, so to speak, for investors to juggle that they’ll be prone to react in unexpected ways. You don't have to sell and bury everything in a jar, just be prepared.

Continue reading below for the charts and brief commentary from Bespoke.

As far as households go, the huge spike in deposits that was a function of COVID relief payments and lower consumer spending is still intact, with household currency and deposits equal to 70% of GDP; households are flush with liquid assets. 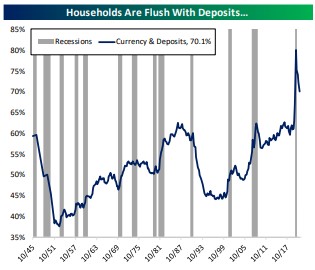 On the liability side of consumer balance sheets, consumer credit levels are the lowest relative to GDP that they have been since Q2 of 2016.

Consumer credit is still rising in absolute terms, but much slower than GDP and incomes to cover it as fiscal relief and lower spending reduced debt growth substantially. 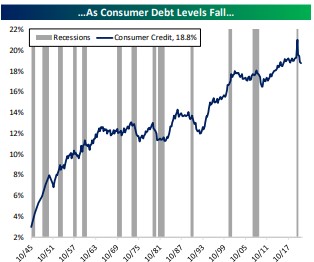 While flush with cash and taking on less consumer credit, households have seen their home equity values soar, with residential real estate debt accounting for just one-third of total asset values. In other words, mortgage leverage relative to housing assets is at the lowest level since the late1980s.

Absolute levels of mortgage debt are rising, but after a big spike relative to GDP driven by the COVID recession, home mortgage debt is trending lower versus output again. 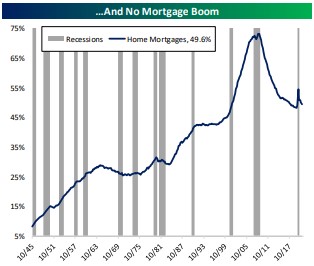