We're in this Together

Home ownership has long been seen as a critical component to success in America. This has so impacted our psychology that many renters feel inadequate for not taking part in what has been called the ownership society. So it’s fair to ask how far will (or should) you go to be a homeowner. It seems declining affordability is causing some buyers to get creative.

GW Bush wasn’t the only president to aim for growing home ownership, of course. FDR’s New Deal and the post-WWII economic and baby boom helped grow our home ownership rate from 44% in 1940 to about 62% by 1960. Growth continued before peaking at 68% in 2007 and obviously took a hit during the Great Recession. We’ve been in the mid-60% range ever since.

While average on the world stage, our current home ownership rate of about 64% seems poised for more growth. There’s so much demand chasing not enough supply. Even amid what many term an affordability crisis, the drive to own a home is so strong that some are looking for alternatives to traditional home ownership.

For example, there’s a growing number of people buying homes in partnership with each other, something known as co-buying. We’ve all heard of this in terms of buying a vacation property with a friend or even with strangers as part of an investment scheme, but more buyers are using co-buying to buy a primary residence. They live together, share expenses, and potential home equity growth as well. They also share risk, which can work out badly if not planned for and if, unfortunately, they’re unlucky.

Honestly, I didn’t know co-buying was that big of a thing, but I’ve been reading about it and wanted to share some information. Ultimately, it’s an interesting development in the ongoing saga of rising real estate prices and what’s sustainable longer-term.

First, let’s review some charts and commentary from my research partners at Bespoke Investment Group. They conduct a monthly survey of 1,500 consumers based on Census data and often come up with interesting analysis. This time it’s about the rise of Millennials and Gen Z as homeowners. This data confirms the anecdotes about younger folks being eager to buy and also excited to fix up their space. 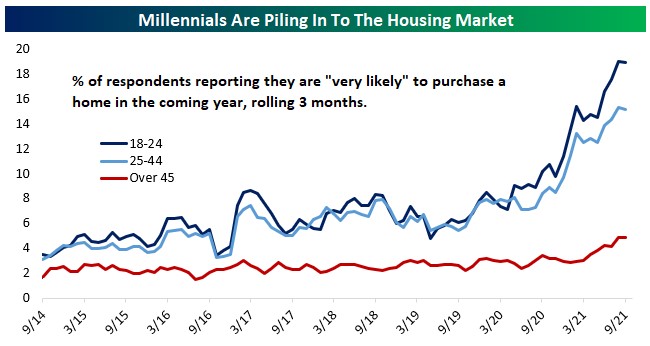 More Millennials and Gen Z consumers are also reporting interest in home improvement. An impressive 45% of 18-24 year-olds and 38.6% of Millennials report that they have started a home improvement project in the last 3 months. Older respondents are in the opposite position: they've steadily been reducing their home improvement over the past several years as shown in the chart below. 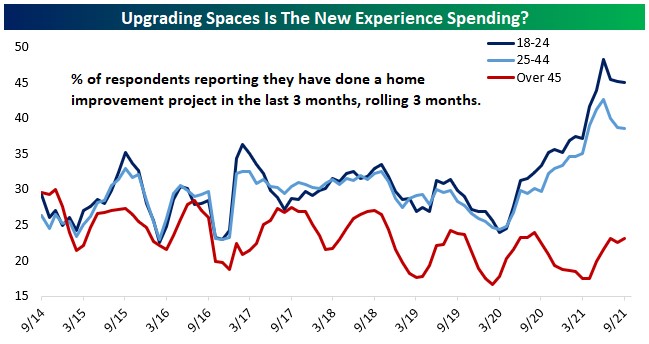 Second, here’s an interesting article on the rise of co-buying among mostly younger buyers. These buyers want a piece of the ownership society, and the pandemic has probably only made that stronger. If they can’t own alone, they’ll own together. While it's great that people are willing to go down this road together, it's also sort of a sad commentary on how bad affordability has become in some areas.

WSJ has a soft paywall, so let me know if you can’t access the story and I’ll email it to you from my account.

Third, and sort of a play on this theme, is an article from this Spring about local pushback against companies marketing this co-buying theme. While the article deals with “fractional” second-home ownership, I wonder if similar complaints might end up being made about co-buyers of primary homes raising neighborhood density and bringing other forms of change to communities.