Never a dull moment. That’s maybe a good way to sum up how markets reacted last Friday to the latest iteration of the coronavirus pandemic. Understandably, investors around the world sold stocks on the thin, but potentially worrisome, news that the omicron variant emerged overseas. Post-Thanksgiving Fridays are usually pretty quiet, but not this year. I imagine many short-term investors, and the algorithms they often employ, waking up from their day off to the cascade of negative headlines and thinking one thing: sell.

At one point the Dow Jones Industrial Average was down over 1,000 points. Scary, sure, when you hear it quoted on the radio or on TV, but still less than a 3% decline on an index that’s up roughly 17% year-to-date. We’ve seen market reactions like Friday play out many times and each raises an important question for long-term investors. What, if anything, should you do when others are freaking out? The short answer is usually nothing. The slightly longer answer is to be ready to buy.

Buying while others are selling takes real intestinal fortitude, no doubt about it. What helps is the basic understanding that the stock market is made up of thousands of individual companies. Some will go bust but most will continue to be around for a very long time, through thick and thin. Values will rise and fall day-to-day, sometimes in dramatic fashion, but will trend higher as the companies continue to produce and sell their products and services. This sounds pretty basic, and it is, but it helps us remain calm when markets get wobbly. And make no mistake, we’re in an unstable market that is merely a representation of the times we’re living through.

The other thing that helps is reviewing market history. To help us here I’ll again pull from my research partners at Bespoke Investment Group. The following are snippets and charts from two different pieces, one from Friday and one from yesterday morning. These cover recent market responses to bad news and a longer-term look at a key gauge of investor anxiety, the VIX. There’s some detail here but, again, looking at information like this helps put market gyrations into context.

As they often do, Bespoke’s research provides good perspective during unsettling times. I can’t praise their work loudly enough. The bottom line is that long-term investors should try to think about the investing process differently than the short-term folks do. It’s just unfortunate that the latter drives the market and the news day-to-day; they’re the smaller group with a louder megaphone, especially on days like Friday.

The S&P 500 [referenced as ticker symbol SPY, a popular fund that tracks the index] experienced its largest downside gap in over a year [Friday] morning. On news that a new variant of COVID has emerged in South Africa, SPY gapped down 1.49% at the open which was the worst opening gap since October 28th of last year when it fell 1.81%. There have been a handful of other 1% or larger gaps down over the past year, and not all of them have been COVID related. In the chart below, we show all of the 1%+ downside gaps since the COVID Crash low on March 23, 2020, highlighting specifically which ones were on COVID headlines and what those headlines exactly were. 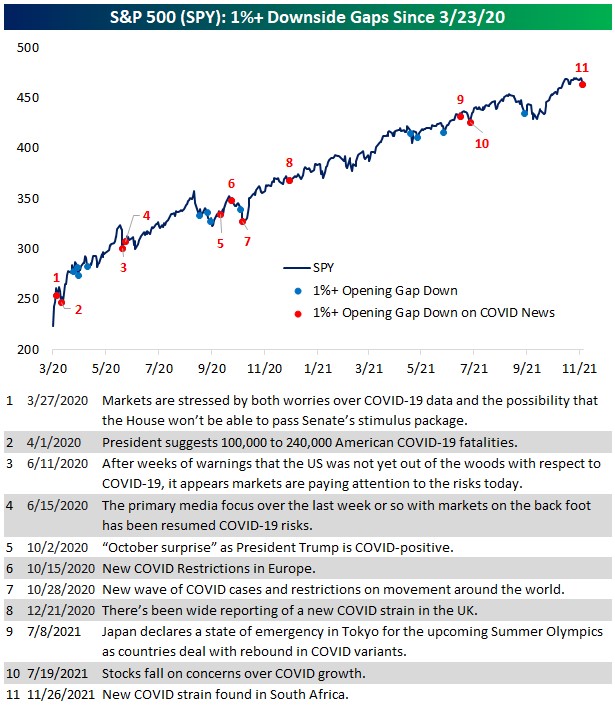 [Recent] headlines and the significant drop are the first in several months with July seeing the last COVID-generated 1%+ opening drop as the Delta variant began to rise and raise concerns for global growth. Prior to that, the initial emergence of the Delta variant at the end of 2020 in the UK was the prior time that SPY opened down 1%+ on COVID news. Since the end of the initial COVID Crash, big gaps down for the market (on both COVID news and non-COVID news) have not resulted in longer-term downtrends.

Looking at those instances in which SPY gapped down at least 1% on COVID news, performance from the open to close has been mixed with gains only half the time, although performance has leaned positive more recently versus earlier in the pandemic. Overall performance over the next week has consistently been positive with gains every time except for once: March of last year which was shortly after the bear market ended. On average, from that lower open to the close one week out, SPY has averaged a 2.79% gain. 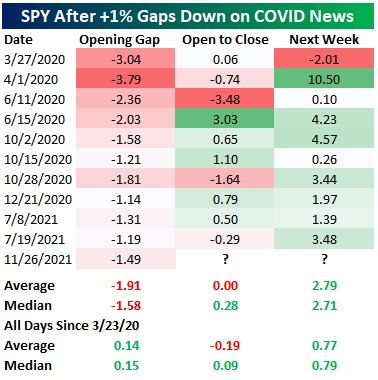 Friday was painful in the equity market on concerns over the new COVID variant first detected in South Africa. The S&P 500’s 2.27% decline was the worst day since September 28th. As equities plunged, the VIX surged 8.64 points which was its largest one-day increase since January 27th. What made Friday’s spike in the VIX somewhat unique (besides the fact that it occurred on the Friday after Thanksgiving) was that it came so close to a record high for the stock market. Just Wednesday, the S&P 500 closed less than 0.1% from its record closing high. Going back to 1990, there have only been six other days where the VIX rose more than 5 points on a day after the S&P 500 closed within 1% of a record high. Each of those dates are highlighted in the chart and table below. 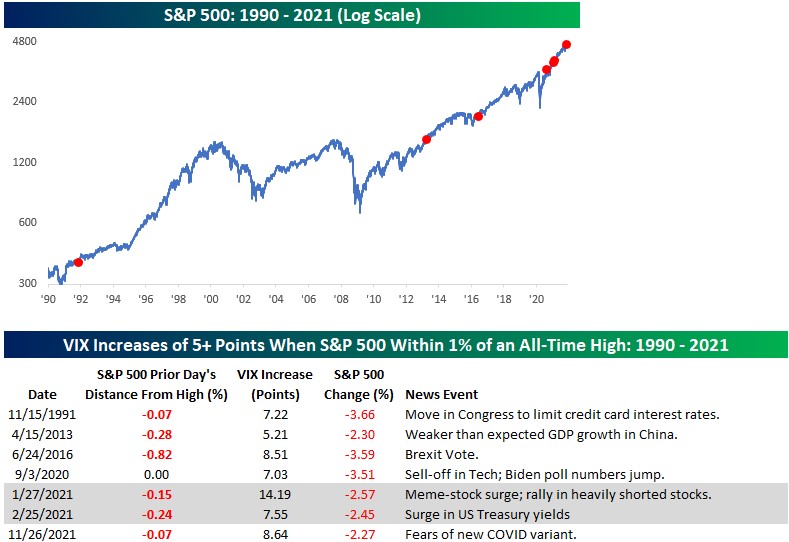 In looking at the prior occurrences, two things stand out. First, outside of the June 2016 spike which was in reaction to the surprise Brexit vote, even though the S&P 500 dropped at least 2% every time, none of the other occurrences were spurred by major geo-political or market events. In looking at the headlines for each of the other days, it wasn’t as though we were like, “That was a notable day in the market.” Only history will tell if this new Omicron strain of COVID ends up being a major market event or not, but our view is that it doesn’t.

The second thing that stands out to us is how much more common these VIX spikes near market highs have become. While the first occurrence was in 1991, there wasn’t another one at all in the 1990s, with the next not until 2013.  After 2013, there wasn't another occurrence for three years. More recently, though, we’ve now seen four occurrences in the last 15 months!  It’s probably more than a coincidence that we’ve also seen an explosion in options volumes during this same span.

Now turning to market performance, in the table below we show the S&P 500’s forward performance following each of the prior six occurrences. Just about every time, the market was quick to bounce back from these prior sell-offs. While returns over the following week were evenly split between gains and losses, one month later, the S&P 500 was higher five out of six times for an average gain of 1.85% (median: 2.45%). Three, six, and twelve months later, returns were even more positive with the S&P 500 higher every time (we have not yet reached the one-year mark from the most recent two occurrences). You can’t get much more consistent than that. In the table, we have also highlighted the two occurrences earlier this year in gray as they came within six months of the prior spike, and therefore there is a good amount of overlap in terms of measuring performance. Even taking those two periods out, though, performance has been consistently positive over the following three, six, and twelve months.